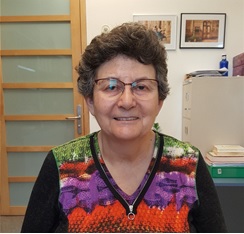 She has also translated children’s literature – especially, Cornelia Funke, Wolfgang Ecke and Michael Ende –, as well as nonliterary works by Hugo Preuss, Karl Renner and Otto Bauer at the request of the Institut d’Estudis Autonòmics.

She has participated in several translators’ meetings with their authors, especially the seminars organized by Günter Grass and his reader Helmut Frielinghaus to translate Grass’s prose (My Century, 1999; Peeling the Onion, 2006; The Box, 2009) and to discuss the (un)translatability of the latest narrative work, Grimms Wörter (2011), as well as about the lyrical poetry of Grass, with Susanne Höbel and Dieter Stolz (2013).

She has also taken part in meetings with authors Julia Franck and Uwe Tellkamp at the Europäisches Übersetzer-Kollegium (European College of Translators) in Straelen (Germany). For health reasons, she was unable to attend the meeting with Timur Vermes in this same institution.